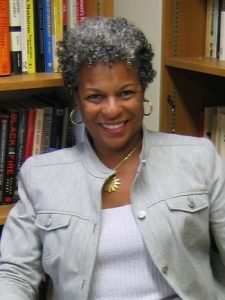 Books
Confessions of a Slot Machine Queen. An issues-oriented memoir that looks critically at the expansion of casino gambling from the perspective of an African American woman who struggled as a young, uneducated and unwed teen mother to earn a Ph.D. in Literature and a position at a major research university only to risk losing everything she worked for after becoming addicted to slot machine gambling. (Madison, WI: EugeniaBooks, 2010)

Literary Masters: Toni Morrison. (Manly Books, Inc. 2002). A comprehensive illustrated overview of Morrison’s life and works currently on the market. It includes photos that have not been previously published and numerous excerpts from magazine and newspaper interviews with Morrison about her involvement in theater and music, an aspect of her work that has rarely been researched.

Books in Progress
African American Women Playwrights: The 21st Century. (Ed. Sandra Adell). This is an anthology of ten plays by African American playwrights. Most of the plays have not been previously published or produced. The anthology includes an introduction by Adell and an interview with each of the playwrights. (Currently under consideration by the University of Illinois Press).

Feminism and Women Theater Artists of the African Diaspora: The 21st Century. A critical examination of Black Women Theater Artists and international feminism in the 21st century. This study looks at feminist practices of black women founding artistic directors, actors and designers (set, light, sound and costume) in the United States, London, France and Ghana. I also explore intercultural relations between black women theater artists and a new generation of women theater artists in Morocco and Egypt.

University of Kentucky Conference on August Wilson. Paper Topic: “August Wilson’s Last Play, Radio Golf, and the Campaign to Save the Hill.” (April 11-14, 2008).