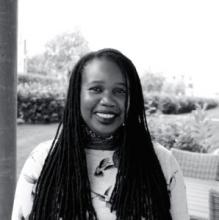 Short Biography
Ethelene is a professor at the University of Wisconsin–Madison affiliated with the departments of Afro-American Studies, German, Nordic, and Slavic, and Gender & Women’s Studies. She received an American-Scandinavian Foundation fellowship and a Lois Roth Endowment grant to support this project. She was also a 2016-2017 Fulbright Scholar and visiting professor at the University of Copenhagen’s Center for Transnational American Studies

Courses Taught
AFROAMER 221 – Introduction to Black Women’s Studies
LIS 665 – Who Writes Your Story? Race & Gender in the Archives
AFROAMER 271 – Searching for a Rainbow: The Transnational Experiences of African Americans in 20th Century Denmark (Summer 2018 in Copenhagen)