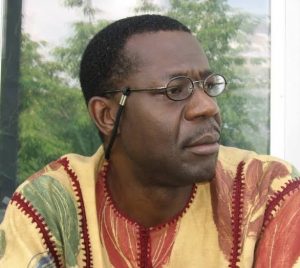 Note: This is a very long post. In my moment of grief, I take solace in writing this reflection to process my confusion and sadness. Thank you to everyone who has checked on me. Thanks for your messages, calls, and responses to my first desperate Facebook post. The pain is still deep, and I may end up writing for days on end but not on social media. Aunty Moji, his wife, was informed, and she gave her blessings to share some of the most intimate stories of the great man who has now become a revered ancestor.

Life is so unpredictable, and we all live on borrowed time. All along, it’s as if Prof. Olaniyan had already planned his passing every step of the way. I know he wanted to stay around much longer, but who could decide their fate when death comes knocking? That gentleman. That brilliant, unassuming gentleman. He left us, many of us, orphaned. I looked up today, and my eyes welled up with tears. My mind is still cloudy with untold anguish that words fail me. I can’t express the pain I’m feeling at the moment. Why do we lose people who are so full of love and gave of themselves unselfishly? Why would such a man who has overcome the worst adversity of life succumb to death that chose to sneak in when least expected? Professor Olaniyan was more than an advisor; he was more than an academic dad, he was (I can’t believe I’m writing was) the reason, if any at all, I would love to remain in the academia.

Olaniyan’s depth of knowledge, honest demeanor and love for those who are fortunate to work with him is unfathomable. He was a shy, principled, and practical man. He lived what he believed, and you can tell from what he has written. He left so many unfinished businesses, but he finished his work here on earth. He’s done his bit, and his work will continue to speak to us. But the pain is sharp and deep. It’s like my world was turned upside down. I was just about completing another chapter after sending him my paper on the Fagunwa Study Group Conference he convened in August in Nigeria to honor D.O Fagunwa and to commemorate Wole Soyinka’s 85th birthday. Teju was Soyinka’s protégé. The Nobel Laureate, according to Aunty Moji, personally signed checks to see him through graduate school for his Masters at Ife. In honor of his teacher, Tejumola Olaniyan named his second professorial chair after Wole Soyinka! So, I had written a paper in honor of these luminaries and sent it to Teju on Thursday before attending the Thanksgiving dinner at his home. He had promised to read it and get back to me.

For the past three days, I have stayed awake, writing furiously. I didn’t know why. I would think my spirit was telling me something that my body only understood but couldn’t communicate with my mind. It’s like I was in a hurry to dump everything on Teju so that he can say, in his characteristic manner, “Okay, Dipo, go ahead.” He’s not one for lengthy talks unless it is necessary. More than what he taught, he was committed to rigorous and focused research. TJ had excellent work ethics, laser-sharp focus, and ethically considerate in his professional life. Tejumola didn’t believe in advising students to be specialists in their dissertation topics; he raised thinkers. He believed in interdisciplinary breadth, depth, and mastery of issues, and so, he would push until one exceeded what one thought was one’s limit. He does it in a blunt, straight-to-the-point tone that sometimes makes students think he’s too demanding and challenging. And sometimes you would feel he’s so angry with you that he’ll just quit advising you altogether. You have his towering image to contend with having read his writings. But when you meet with him at office hours, he’ll kindly explain what he thought you should pay attention to, and he would reel out tons of books to look up off-hand. Eventually, you would end up with something close to a masterpiece. Teju detests obfuscating an idea with highfalutin use of words. In his work, he expresses complex analysis of phenomena, with unusual depth, in simple, but nuanced language. He expects the same of his students. His favorite word for this way of thinking is “density.”

Teju was so humble to a fault for a man who has written interdisciplinarily field-defining books. He was a man of many accomplishments. He held two professorial chairs ( a rare and unusual privilege for an academic) before his passing; one would expect him to carry himself with an air of superiority. Not Teju. He was such an unassuming gentleman. He had a unique sense of humor, and food is usually a part of his classes. There would be snacks and drinks to go along with learning in TJ’s courses. He would do rosters for students to bring snacks, and he would supply juice and more snacks. I once worked with him as a Project Assistant on African Political Cartoons. There’s always food to snack on in his office. At conferences, occasionally, Teju would ask to hang out with me after the main events. I’m always excited at those chances because dinner was always on him, and I get to talk about everything bothering me from my family issues, my struggle with research, and everything else. He would listen and respond in a very reassuring manner, sometimes in the most local Yoruba accent. That’s his unique style of mentoring.

Tejumola Olaniyan has a quiet demeanor, a deep baritone voice, and a lean, tall, towering physique. With his spectacles on, a lot of students find him intimidating. Still, when you manage to crack through that visage, he’s a friend and father-figure before being a professor. I think I did, and it offered me a chance to learn from him and know him beyond his job title and contributions to scholarship.

His loving wife, lifelong partner, and friend, Aunty Moji Olaniyan, an accomplished Law Professor and administrator, also took an interest in me as she does with many of Teju’s students. She usually “co-parents” Teju’s many non-biological children. And one thing that I know is that there is nothing you tell him that she doesn’t know, and nothing gets past her without him knowing. They are tight like that.

One evening, early this year, aunty had called me to meet at a restaurant to discuss something. It was a plan she was hatching for a surprise birthday party for Teju. Teju doesn’t like ceremonies and never wanted nor lived an extravagant lifestyle. He kept everything simple. He doesn’t like to be praised and feted with real or pretentious admiration. She had approached him with the idea of a grand party, but he didn’t agree to it. So, the immediate family played along and gave him the befitting small party at home. Unknown to him, they went ahead with the plans for months. The event held after the African Literature Association 2019 Conference in Columbus, Ohio. So, aunty let me in on it and explained why.

Prof. Tejumola Olaniyan had a heart condition. He could have left us thirteen years ago, but for advanced medical science in the US and his commitment to stay with his loved ones kept him active and alive. The heart was weak, and so, his cardiologists had to slow it down. He followed the dietary and other health-related guidelines to the letter. For thirteen years, Prof. Teju Olaniyan was a living miracle and a gift to all of us! And the family, at every turn, had been preparing for the unexpected, but no one can be that prepared.

The birthday was a huge success! Aunty Moji, like the force of nature she is gathered Teju’s family, friends, acquaintances, and past and current students. He was genuinely shocked and surprised when Prof. Adeleke Adeeko and his other close friends lured him into the party! He thought they were going to lunch with a few friends. He cried, and after recovering from the “coup,” he went around the tables to appreciatively accuse us of betraying him joining that grand conspiracy without warning! That day, every one from his immediate and extended family, childhood friends, friends from his college days, professional colleagues, and well-wishers testified to Teju’s fantastic personality and the impact he made in their lives. I also had the privilege to give this brief speech.

Prof. Teju Olaniyan, according to his loving wife, usually says, “every day I’m alive is a good day.” Prof. Olaniyan had two wishes: that he wouldn’t leave aunty Moji with the burden of raising their two amazing daughters and that whenever his time comes, he wanted to go without pain and suffering. Providence granted him his wishes. He was able to see their children graduate with great feats in their fields and settled professionally, and when death came knocking, he was in good health and had packed his bag for a conference in Europe. The family was downstairs for some minutes, and when they went back upstairs, he was lying on his bed in a peaceful sleep. When aunty Moji made that first distressing call, and she told me it was an emergency, I was much worried knowing what I knew. I couldn’t focus on anything because I feared the worst had happened, and it had. It wasn’t a heart attack; it was heart failure. The heart just failed, switched off, without a warning. There was no sign of struggle, Tejumola Olaniyan just went to sleep and didn’t wake up amid preparations to continue doing what he loved—scholarship. He slept at home, surrounded by his family.

Prof. Tejumola Olaniyan was a leading light in African, Black Diasporic cultural and literary studies and criticism. He was completing another ground-breaking book on African Political Cartoons, just as he did with Arrest the Music! Fela and his Rebel Art and Politics; Scars of Conquest, Masks of Resistance; his famous anthology, co-edited with Ato Quayson, African Literature: An Anthology of Criticism and Theory, and many others. Teju wrote a lot and was an expert on almost any subject in the humanities. Mention any topic, Teju has written an article or a book on it! I struggle to avoid quoting him a lot, but fortunately, he has written a lot, and you can’t just look past his insights. Also, when you name-drop Tejumola Olaniyan, a lot of scholars will take you seriously.

Teju was a dedicated mentor to graduate students and junior scholars in Africa and the US. Teju was Louise Durham Mead Professor of English and Wole Soyinka Professor of the Humanities. He had a joint appointment in English and African Cultural Studies departments at the University of Wisconsin, Madison. He was the editor of the Journal of African Literature Association. Teju was a loving father and husband. He was, until his death, my advisor, mentor, and a father in many regards.

I’m still grieving but thankful for having met and worked with him. 60 was too brief, TJ. I will miss you, and I am sorry we could not finish this project together. Thank you, sir, for all you’ve done for my family and me. I’m grateful for the life you lived and the legacy you left behind. Sleep well, great man.